The summer vacationers were recently on the go, they are currently followed by all those who do not have to go on vacation during school holidays – and soon there will be a big wave of travelers who can only travel again during the autumn vacation because of school-age children. Three types of vacation, one phenomenon: Whenever many people are on the highways or on country roads at the same time, there is a traffic jam. People are jostled, honked and squeezed into gaps. Motorists wave around wildly and look at each other angrily. The stress level increases, with it the aggressive driving behavior – and that makes everything even worse.

What can you Learn from Ants?

There is no traffic jam with ants

Different place, same situation: a clearing in the forest, a cut tree stump, millions of small crawling animals that move on top of, next to and around him from A to B and back on the opposite lane. The ants are on the loose. They work, collect, run. Many, very many in a very small space. But does the multi-legged parade stall somewhere? Is there a lump in the fray somewhere? A ball of ants, no progress, traffic jam? The answer is clearly “no”. Ants are different. 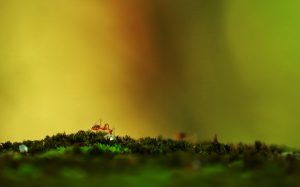 The secret is the speed

Two researchers from Cologne investigated this together with colleagues from India. And they have found out that the streets of the ants may look like a hidden object book to our human eyes, but are generally more contemplative. Because the ants adapt their pace to each other and trot along in a nice, calm manner. If a raging ant happens to run into a lame snail, it brakes and walks comfortably behind it at the other’s pace. Because the top rule in the ant kingdom is: “walk nicely in a line” this controls them to stay in their line. Don’t overtake, don’t jostle, everyone stays in their place. Always.

What the ants have ahead of drivers is that the flow of animal traffic can keep at a constant pace. In contrast to the sheet metal avalanche, no one swerves or pushes their way into it, no one hampers or slows others down. The column flows. Humans don’t seem to be able to do that, they always want to be first, nothing flows – there is a traffic jam.

An experiment with a car

Scientists from Nagoya University in Japan carried out an experiment: a few years ago they had 22 vehicles drive in a circle. A simple task for which there was only the instruction that everyone should drive at a constant speed and at a constant distance from one another. Just like the ants – and actually the column should be able to go around in circles for ages. But after just a few minutes, a traffic jam formed, and shortly afterwards the cars had to stop. And all because a single driver dawdled. That would never happen with the ants.

Community instead of rush

The difference between ants and us humans is simple but important: ants act collectively. They submit to the community and the common goal. That is why the faster ones adapt their pace to the slower ones. Most people, on the other hand, act out of pure self-interest – and can thus bring the best thought-out system to collapse. If everyone just thinks about getting home quickly, they’ll be jostled. And then if the jostling group meets a slower driver who simply adheres to traffic rules and speed limits, a traffic jam forms. This is to be prevented by binding speed specifications.

What Can We Learn From Animals?